A review of the most commonly-specified design options that enable a planter to be lifted and moved via pallet truck or fork lift.

For lighter planters, located on a reasonably fair surface, it may be possible to move the planters manually with castors. This option is cheap, quick and easy – as described here: Moving Planters with Castors >>

However, where the planters are heavy, and/or the ground is rough, then mechanical means of lifting and movement are necessary – and the devices used are generally pallet trucks or fork lifts. In either case, the forks of the device need to pass under the planter, and the base of the planter needs to be strengthened to take the loading.

There are many ways to design a planter to be moved via pallet truck / fork lift, but three options are most commonly specified. Which option to specify generally comes down to a cost vs. aesthetic trade-off, and the options are listed below in order of ascending cost [from the cheapest, to the most expensive].

The first option is to design the planter such that the functional requirement for movement is not apparent.

Generally this objective is achieved by having a long, elevated central span; and this reads like a design feature of the planter, rather than a functional add-on. In a geometric built environment, which is common, this design can often feel very much in keeping with its surroundings. The underside of the planter is lined with Stainless Steel, to avoid the forks damaging the planter.

This option is not only the cheapest option, but it is also the most aesthetically pleasing, in our opinion. As such, it is the option that IOTA most often recommends.

The second cheapest option is to design the planter with runners or skids underneath [generally two or three, unless the planter is particularly large]. The underside of the planter is lined with Stainless Steel, to avoid the forks damaging the planter.

This is a perfectly functional solution, and also cost-effective; however some may feel that the aesthetic is compromised.

The final, and most expensive, option is to create ‘front-to-back’ channels for the forks, within the base construction of the planter. These channels are lined with Stainless Steel, to avoid the forks damaging the planter.

Fork channels are more expensive than runners / skids, but it does give a more ‘designed-in’ aesthetic [in other words, the channels are still noticeable, but they nonetheless look like they are an integral part of the planter design]. Bespoke steel planters are commissioned for the largest BMW retail centre in Europe. 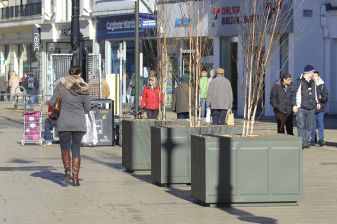 Corten Steel tree planters are commissioned by The City of Edinburgh Council, as part of streetscape improvements to Leith Walk. 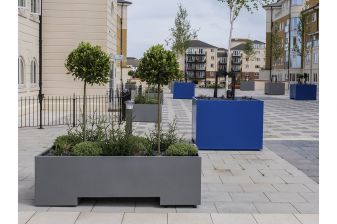 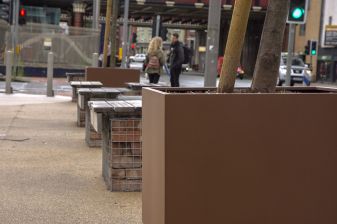 Bespoke steel planters are commissioned for the landmark New Bailey development in Salford. Bespoke steel planters are commissioned for the refurbishment of One Lochrin Square, Edinburgh’s largest office building. 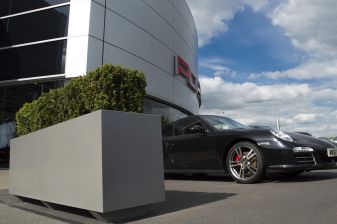 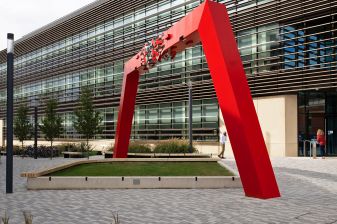