There are myriad ways in which seating can be incorporated within a planter scheme, and a great many materials that can be used for the seating. So the options discussed here are in no way exhaustive – it is rather a discussion of the most commonly specified solutions.

In addition to seating combined with planters, IOTA also supplies standalone seating - as also shown in the Image Gallery.

A. The Design Fundamentals

When seating is combined with a planter, then the load bearing and load distribution requirements are completely changed  and the planter must be structurally re-engineered. This is equally required where structures other than seating are added to a planter – as discussed here: Adding Balustrades, Trellises or Fencing to Planters >>

Thankfully, metal is the ideal material with which to combine seating and planters into an integrated design; and the addition of seating need not be expensive. The strength and stiffness of an IOTA planter comes from the manner in which loads are spread internally via vertical stiffeners, cross-braces and base / rim structures; and, with the addition of relatively inexpensive stock metal sections, these pre-existing internal planter structures can also be used to spread the loads of seating. So with intelligent design, and an eye on cost, most often a standard planter design can be evolved to include seating without the need for revolutionary design changes.

There are, of course, always exceptions to the rule; and sometimes the brief does require a radically new design approach – project examples of which include:

For the most part, however, the design changes needed to add seating are relatively easily understood, as discussed below.

The only commonly-held belief is that seating should generally be around 450mm off FFL. That’s about it – and the rest is down to the imagination and creativity of the designer / architect.

However two generic arrangements are the most commonly specified, based on which a wide variety of designs are achievable.

Here the seating is offset from the face of the planter, and supported by a series of cantilevers. These cantilevers are generally anchored internally within the planter, with the loads spread via the planter’s vertical stiffeners and cross-braces.

Generally, with an Offset Cantilevered solution, no modifications are required to the essential design or material specification of the planter, and thus this is generally the cheapest option to add seating.

The drawback with this arrangement is that significant torsional loads are created; and this restricts both the amount of seating that can be designed-in at reasonable cost, and the nature of the seating itself. For example: Offset Cantilevered works well for occasional seating in commercial breakout areas, with modest [say, L 350 x W 50 x H 50mm] FSC hardwood timbers; but the option does not work well for the massive seating timbers [such as L 500 x W 70 x H 150mm] which are often used for permanent seating in public realm. In these kinds of situations, a more robust solution must be specified.

Top-Mounting is an extremely robust arrangement; in which the torsional seating loads are progressively reduced, and progressively transferred to compressional loads [the extent of this transference being dictated by the amount of residual offset].

With this option, the material specification of the planter walls needs to be ‘beefed-up’; and additional structures [such as gussets] are required underneath to support the seating.

Other than cost, this arrangement has no particular drawback. And, with all of the stresses now carried by the planter walls, there is no longer the need to transfer the loads within a planter – and thus Top-Mounted is ideal for inclusion within Planted Perimeters [which is much trickier with Offset Cantilevered].  A fuller discussion of the pros and cons between different planter options may be found here: Do I Need a Planter or a Planted Perimeter? >>

A final benefit of the Partially Offset Top-Mounted option is that the seated person's clothes never touch the planter; making this option ideal, for example, for Corten Steel and/or inner-city public realm. To achieve the same objective with Offset Cantilevered requires the inclusion of seat backs, at added cost.

Using just the above two generic arrangements, there are endless design possibilities – and a selection of IOTA’s prior work is shown here, with our hope that it inspires.

Seating may be straight or curved or sinuous; it may be exposed, or inset into the planter to create secluded areas; and seating can be combined with any number of different planting schemes, big or small. And the material selection and design of the seating itself, can dramatically influence both the functionality and aesthetic. With modern CNC machining, for example, sculpting the individual timbers used for the seating, can elevate the perceived value-added on higher-end schemes.

Finally, once the general design is established, other design elements can easily be included: such as LED underlighting, seat backs, armrests, anti-skate board devices etc.

The final specification decision relates to the material selection for the seating – and, here again, the possibilities and choice are vast.

Any material which is relatively stable may be used, and there are examples shown here of IOTA’s work with:

These are commonly-specified options. However, with creative licence, there is no reason why other stable materials could not be used – such as natural stone, ceramic or porcelain, or complementary metals. 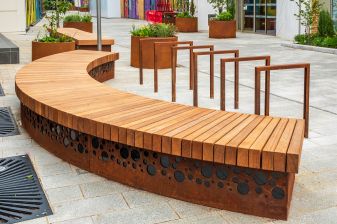 IOTA was commissioned to supply a range of bespoke Corten Steel and timber streetscape elements, for the Filmworks development in Ealing, West London. 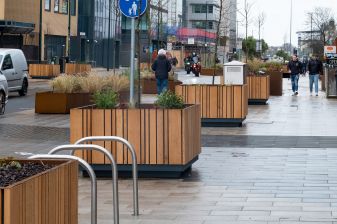 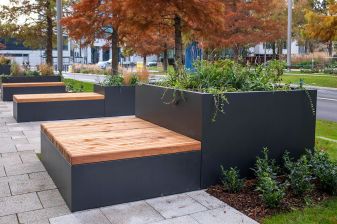 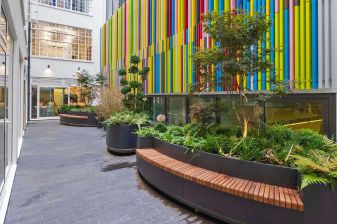 Bespoke steel planter / benches, plus planters, were commissioned for the refurbishment of the Art Deco Elsley House building, London W1 Bespoke Corten Steel planter-benches are specified by Ealing Council, as part of highways and public realm improvements in Hanwell.

'Rocks and Reeds' – a City Parklet designed by PARTI for the London Festival of Architecture 2019. Manufactured in Corten Steel, and installed, by IOTA. IOTA was commissioned to supply Corten Steel planters, plus benching, for a public realm scheme in Castleblayney, Co. Monaghan, EIRE. Bespoke stainless steel planter-benches are commissioned for the new offices of Royal Bank of Canada in Jersey. IOTA supplies a complete package of street furniture to the Tyseley Wharf development in Birmingham.